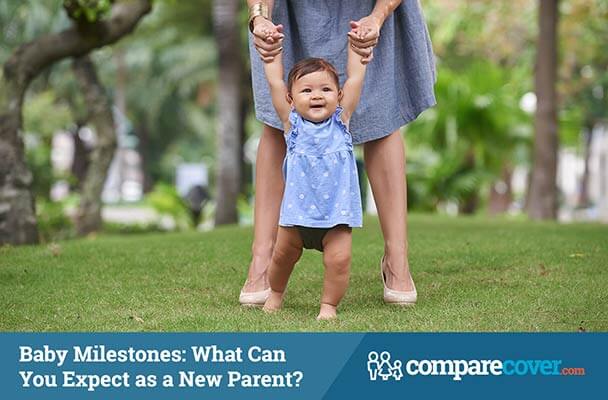 Baby development milestones: What can you expect in the first year?

Time seems to fly by when you have a baby on your hands, so typical development milestones may feel as though they happen overnight when you're a new parent! While every child is different, most babies and children will meet development milestones at a similar time, something which could be helpful for new parents who want to know what they can expect in advance.

So if you can hear the patter of teeny-tiny feet in the near future, here are some of the things you could expect to see in their first year.

When a baby is born, they tend to only be able to focus on objects 8 to 10 inches in front of them. Most of what they see is blurred but they can distinguish light, shapes and movement. By the end of month 1, however, most babies will start to see more clearly. In fact, by this developmental stage, most babies will prefer the human face to other shapes.

Parents may also notice the difference in their movements as many babies begin to lift their heads for short periods by the end of their first month of life.

Many parents look forward to the milestone of the first smile. This is something that often happens in the second month, as well as laughing and more gurgling and cooing sounds. Around this stage of development, parents may notice babies moving a little more as many infants begin to lift their head up and may even be able to bear their weight on their legs with support.

By the end of the third month, many babies start to become more sociable and may smile more often and responsively. They also often begin to move a little more independently and parents may notice them reaching for objects, grasping toys and kicking their legs.

Many parents may start to get a little more sleep by the end of month 4 as many babies begin to sleep for longer periods at night. Parents may also see the signs of the first tooth and may even see their baby roll over.

Around this stage of development, some babies may begin to show signs that they are more self-aware as they may recognise and respond to the sound of their own name. They may even start rolling over from their back to their tummy.

By month 6, parents may notice that their baby can sit up with little to no support and can keep their head level. At this stage some babies may also copy facial expressions and actions.

In the seventh month, some babies start to try and crawl, although some may take a little bit longer. Many infants can start to imitate speech, although it may not make much sense yet!

At this stage, parents may start to notice that their baby shows signs of anxiety when they are removed from them. They may also start to say 'mama' or 'dada', however they may not distinguish between the words and each parent just yet.

Month 9 - Getting to grips

Many babies may have a more developed sense of hand-eye coordination and begin to pick up small objects. At the same time, parents may notice that their baby tries to grab the spoon when being fed.

Parents may feel as though their baby is starting to have a better understanding of what they are saying to them by month 10. Babies may also begin to pull themselves up to standing and could move around with greater ease with the aid of nearby objects.

Around the eleventh month, many babies will be able to stand unassisted for a few seconds. They may begin to take a few cautious steps and start exploring their surroundings by climbing.

As a 1-year-old, many babies will make word-like sounds and even respond when they are being spoken to. At this stage some infants might begin to take their first steps, although it is perfectly normal for many children to take a little longer for this. Some even manage it early!

While some infants will fit in with these milestones, many will take things at their own pace and do things earlier or later than expected.

Some parents may begin to think about life insurance as they watch their children meet development milestones, and at Compare Cover, we provide the tools for new parents to compare life insurance quotes using our life insurance calculator.

Get life quotes in just 4 minutes! 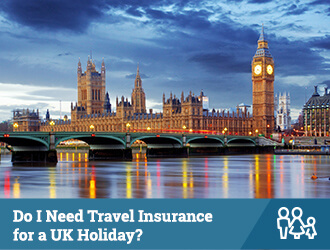 Do you need travel insurance for UK holidays?

Last year saw record numbers of Brits chose to stay in the UK for their summer holidays, with Covid-related restrictions and complications making...

Is life insurance worth it?

Life insurance is a subject that some may be reluctant to discuss, but it can be an important subject to think about as you get older...

When you're young, the thought of your own demise is probably the furthest thing from your mind. However, for a number of reasons that we're...